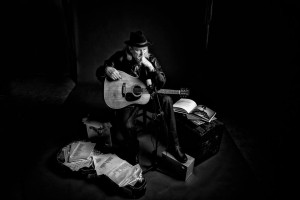 “Bruce Piephoff is a delightful poet and musician with a talent for composing poetry of fine clarity and immediate appeal; his art is cheerful and open and he has a real feeling for his subject matter. He is of admirable personal character and has been courageous in pursuit of his genuine vision.” – Fred Chappell (Poet Laureate of North Carolina; 1997-2002)

Bruce Piephoff has been writing and performing songs and poetry for over 40 years. Firmly a part of the Appalachian tradition of story-songs and character portraits, it’s his versatility that makes his music so fascinating. Easily touching both the shores of folk music and poetry with simple, compelling imagery and subtle depth, Piephoff’s unassuming voice, ringing with wit and sincerity, steals the show.

He began in Chapel Hill, NC in the late 60’s, while a student at UNC-Chapel Hill, at the age of 19. Searching for a major, he decided on English, and followed a life long love of literature. As a child, Bruce was a dreamer at heart, and loved the classic comic books of that time. These led him to the classics themselves, including Huckleberry Finn, The Count of Monte Cristo, Moby Dick, etc.

After two years, Bruce dropped out of college to pursue music. He was particularly inspired by his dad’s collection of Bob Dylan and Woody Guthrie records. His dad also played guitar, harmonica, and sang as a hobby, but Bruce immediately felt this could be his vocation. Bruce traveled nationwide, playing in small cafes and bars. He spent time in New York, Nashville, and Los Angeles, before travelling to Europe and playing in the streets of Amsterdam as a busker. By the age of 27, he had landed back in Durham, NC, working at John Umstead Hospital as a music and recreation therapist, and playing his music on weekends.

From there, Bruce decided to go back to UNC-Greensboro, where he finished his education with a B.A. in English, and a M.F.A. in Creative Writing from the school’s acclaimed writing program. He studied poetry with Fred Chappell and Robert Watson before entering the N.C. Arts Council’s Visiting Artists Program. This program enabled Bruce to become the Artist-in-Residence in a number of community colleges across NC, including those in Columbus, Brunswick, and Pitt counties. He then went on to residencies in Orlando, FL; Danville, VA; Norfolk, VA; and western NC. Bruce appeared at thousands of performances through this program, at locations such as schools, churches, and festivals, until the program ended in 2001.

Since then, Bruce has returned to working as an independent singer, songwriter, and poet; he has recorded 21 CDs of original material for Flyin’ Cloud Records, and performed nationwide on the folk singer/songwriter circuit. He just published his second book of poetry, Fiddlers and Middlers, in 2009. In October, 2011, he released his 21st CD, Still Looking Up At The Stars, produced by Scott Sawyer. Bruce has shared the stage with Steve Forbert, Riders In The Sky, Greg Allman, Chuck Brodsky, Tom Paxton, and others, and has played everywhere from Merlefest to the Kennedy Center in Washington, DC.